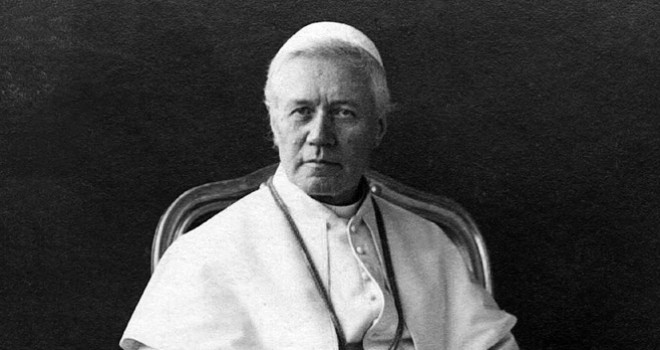 With truly lamentable results, our age, casting aside all restraint in its search for the ultimate causes of things, frequently pursues novelties so ardently that it rejects the legacy of the human race. Thus it falls into very serious errors, which are even more serious when they concern sacred authority, the interpretation of Sacred Scripture, and the principal mysteries of Faith. The fact that many Catholic writers also go beyond the limits determined by the Fathers and the Church herself is extremely regrettable. In the name of higher knowledge and historical research (they say), they are looking for that progress of dogmas which is, in reality, nothing but the corruption of dogmas.

These errors are being daily spread among the faithful. Lest they captivate the faithful’s minds and corrupt the purity of their faith, His Holiness, Pius X, by Divine Providence, Pope, has decided that the chief errors should be noted and condemned by the Office of this Holy Roman and Universal Inquisition.

1. The ecclesiastical law which prescribes that books concerning the Divine Scriptures are subject to previous examination does not apply to critical scholars and students of scientific exegesis of the Old and New Testament.

2. The Church’s interpretation of the Sacred Books is by no means to be rejected; nevertheless, it is subject to the more accurate judgment and correction of the exegetes.

3. From the ecclesiastical judgments and censures passed against free and more scientific exegesis, one can conclude that the Faith the Church proposes contradicts history and that Catholic teaching cannot really be reconciled with the true origins of the Christian religion.

4. Even by dogmatic definitions the Church’s magisterium cannot determine the genuine sense of the Sacred Scriptures.

5. Since the deposit of Faith contains only revealed truths, the Church has no right to pass judgment on the assertions of the human sciences.

7. In proscribing errors, the Church cannot demand any internal assent from the faithful by which the judgments she issues are to be embraced.

8. They are free from all blame who treat lightly the condemnations passed by the Sacred Congregation of the Index or by the Roman Congregations.

9. They display excessive simplicity or ignorance who believe that God is really the author of the Sacred Scriptures.

10. The inspiration of the books of the Old Testament consists in this: The Israelite writers handed down religious doctrines under a peculiar aspect which was either little or not at all known to the Gentiles.

11. Divine inspiration does not extend to all of Sacred Scriptures so that it renders its parts, each and every one, free from every error.

12. If he wishes to apply himself usefully to Biblical studies, the exegete must first put aside all preconceived opinions about the supernatural origin of Sacred Scripture and interpret it the same as any other merely human document.

13. The Evangelists themselves, as well as the Christians of the second and third generation, artificially arranged the evangelical parables. In such a way they explained the scanty fruit of the preaching of Christ among the Jews.

14. In many narrations the Evangelists recorded, not so much things that are true, as things which, even though false, they judged to be more profitable for their readers.

15. Until the time the canon was defined and constituted, the Gospels were increased by additions and corrections. Therefore there remained in them only a faint and uncertain trace of the doctrine of Christ.

16. The narrations of John are not properly history, but a mystical contemplation of the Gospel. The discourses contained in his Gospel are theological meditations, lacking historical truth concerning the mystery of salvation.

17. The fourth Gospel exaggerated miracles not only in order that the extraordinary might stand out but also in order that it might become more suitable for showing forth the work and glory of the Word lncarnate.

18. John claims for himself the quality of witness concerning Christ. In reality, however, he is only a distinguished witness of the Christian life, or of the life of Christ in the Church at the close of the first century.

19. Heterodox exegetes have expressed the true sense of the Scriptures more faithfully than Catholic exegetes.

20. Revelation could be nothing else than the consciousness man acquired of his revelation to God.

21. Revelation, constituting the object of the Catholic faith, was not completed with the Apostles.

22. The dogmas the Church holds out as revealed are not truths which have fallen from heaven. They are an interpretation of religious facts which the human mind has acquired by laborious effort.

23. Opposition may, and actually does, exist between the facts narrated in Sacred Scripture and the Church’s dogmas which rest on them. Thus the critic may reject as false facts the Church holds as most certain.

24. The exegete who constructs premises from which it follows that dogmas are historically false or doubtful is not to be reproved as long as he does not directly deny the dogmas themselves .

25. The assent of faith ultimately rests on a mass of probabilities .

26. The dogmas of the Faith are to be held only according to their practical sense; that is to say, as preceptive norms of conduct and not as norms of believing.

27. The divinity of Jesus Christ is not proved from the Gospels. It is a dogma which the Christian conscience has derived from the notion of the Messias.

28. While He was exercising His ministry, Jesus did not speak with the object of teaching He was the Messias, nor did His miracles tend to prove it.

29. It is permissible to grant that the Christ of history is far inferior to the Christ Who is the object of faith.

30 In all the evangelical texts the name “Son of God” is equivalent only to that of “Messias.” It does not in the least way signify that Christ is the true and natural Son of God.

31. The doctrine concerning Christ taught by Paul, John, and the Councils of Nicea, Ephesus and Chalcedon is not that which Jesus taught but that which the Christian conscience conceived concerning Jesus.

32. It is impossible to reconcile the natural sense of the Gospel texts with the sense taught by our theologians concerning the conscience and the infallible knowledge of Jesus Christ.

33 Everyone who is not led by preconceived opinions can readily see that either Jesus professed an error concerning the immediate Messianic coming or the greater part of His doctrine as contained in the Gospels is destitute of authenticity.

34. The critics can ascribe to Christ a knowledge without limits only on a hypothesis which cannot be historically conceived and which is repugnant to the moral sense. That hypothesis is that Christ as man possessed the knowledge of God and yet was unwilling to communicate the knowledge of a great many things to His disciples and posterity.

35. Christ did not always possess the consciousness of His Messianic dignity.

36. The Resurrection of the Savior is not properly a fact of the historical order. It is a fact of merely the supernatural order (neither demonstrated nor demonstrable) which the Christian conscience gradually derived from other facts.

38. The doctrine of the expiatory death of Christ is Pauline and not evangelical.

39. The opinions concerning the origin of the Sacraments which the Fathers of Trent held and which certainly influenced their dogmatic canons are very different from those which now rightly exist among historians who examine Christianity .

40. The Sacraments have their origin in the fact that the Apostles and their successors, swayed and moved by circumstances and events, interpreted some idea and intention of Christ.

41. The Sacraments are intended merely to recall to man’s mind the ever-beneficent presence of the Creator.

42. The Christian community imposed the necessity of Baptism, adopted it as a necessary rite, and added to it the obligation of the Christian profession.

43. The practice of administering Baptism to infants was a disciplinary evolution, which became one of the causes why the Sacrament was divided into two, namely, Baptism and Penance.

44. There is nothing to prove that the rite of the Sacrament of Confirmation was employed by the Apostles. The formal distinction of the two Sacraments of Baptism and Confirmation does not pertain to the history of primitive Christianity.

45. Not everything which Paul narrates concerning the institution of the Eucharist (I Cor. 11:23-25) is to be taken historically.

46. In the primitive Church the concept of the Christian sinner reconciled by the authority of the Church did not exist. Only very slowly did the Church accustom herself to this concept. As a matter of fact, even after Penance was recognized as an institution of the Church, it was not called a Sacrament since it would be held as a disgraceful Sacrament.

48. In his Epistle (Ch. 5:14-15) James did not intend to promulgate a Sacrament of Christ but only commend a pious custom. If in this custom he happens to distinguish a means of grace, it is not in that rigorous manner in which it was taken by the theologians who laid down the notion and number of the Sacraments.

49. When the Christian supper gradually assumed the nature of a liturgical action those who customarily presided over the supper acquired the sacerdotal character.

50. The elders who fulfilled the office of watching over the gatherings of the faithful were instituted by the Apostles as priests or bishops to provide for the necessary ordering of the increasing communities and not properly for the perpetuation of the Apostolic mission and power.

51. It is impossible that Matrimony could have become a Sacrament of the new law until later in the Church since it was necessary that a full theological explication of the doctrine of grace and the Sacraments should first take place before Matrimony should be held as a Sacrament.

52. It was far from the mind of Christ to found a Church as a society which would continue on earth for a long course

of centuries. On the contrary, in the mind of Christ the kingdom of heaven together with the end of the world was about to come immediately.

53. The organic constitution of the Church is not immutable. Like human society, Christian society is subject to a perpetual evolution.

54. Dogmas, Sacraments and hierarchy, both their notion and reality, are only interpretations and evolutions of the Christian intelligence which have increased and perfected by an external series of additions the little germ latent in the Gospel.

55. Simon Peter never even suspected that Christ entrusted the primacy in the Church to him.

56. The Roman Church became the head of all the churches, not through the ordinance of Divine Providence, but merely through political conditions.

57. The Church has shown that she is hostile to the progress of the natural and theological sciences.

58. Truth is no more immutable than man himself, since it evolved with him, in him, and through him.

59. Christ did not teach a determined body of doctrine applicable to all times and all men, but rather inaugurated a religious movement adapted or to be adapted to different times and places.

61. It may be said without paradox that there is no chapter of Scripture, from the first of Genesis to the last of the Apocalypse, which contains a doctrine absolutely identical with that which the Church teaches on the same matter. For the same reason, therefore, no chapter of Scripture has the same sense for the critic and the theologian.

63. The Church shows that she is incapable of effectively maintaining evangelical ethics since she obstinately clings to immutable doctrines which cannot be reconciled with modern progress.

64. Scientific progress demands that the concepts of Christian doctrine concerning God, creation, revelation, the Person of the Incarnate Word, and Redemption be re-adjusted.

65. Modern Catholicism can be reconciled with true science only if it is transformed into a non-dogmatic Christianity; that is to say, into a broad and liberal Protestantism.